I’m easily swayed by pizza commercials. Working at a major television network, and I’ve got my desk tv on a channel that caters to a real pizza-eating demographic all day long. Flash me a photo of greasy cheesy and all of a sudden I’m IM-ing multiple coworker friends just to share the fact that I’m now jonesing for a pizza. Surely they love that I disrupt their productive work lives to share such intellectual gems as OOOOHHH PIZZA ON MY TV. I WANT THAT.

I got 2 PR’s in the gym today. Got that 140lb Clean & Jerk, and I lopped 16 seconds off of my previous Diane time. Then, I sat in my cube and worked straight until 7:15. Working straight until 7:15p doesn’t exactly sound like fun, but finally catching up on a pile of invoices that just hasn’t relented since going on vacation 2 weeks back feels awesome.

Needless to say, despite the crappy weather, I feel like I had a pretty accomplished Monday. I wanted to celebrate. With junk food, of course. First, I found THIS at CVS:

Then I got home, still with an image of super national mega pizza chain in my mind, I suddenly decided that I had provolone cheese, some tomatoes and an unpublished paleo pancake recipe that may make a decent pizza crust if I took out the cinnamon and vanilla. Things didn’t go according to plan.

Then again, do they ever?

Ingredients for the Crust:

I’m not sure how structured the steps to get from pile of ingredients to PIZZA should be. It was an adventure. Why, you ask?

You know what’s fun about cooking paleo-ish things in the summer? Coconut oil melts at 70-something degrees. I digress.

The crust dough seemed a bit like paste… this is when I thought to myself “anyone who tries to make this recipe is going to think I’m nuts and think they did it wrong.” Hence the asterisk.

*Knock back the quarter cup of Coconut Flour to 2 tbsp and go from there. Add in bit by bit until the mixture reaches a consistency you’re comfortable with. Mind you, I’m no master chef. I just make things, take pictures and ramble about it.

Not gonna lie, plunking a dough ball into a warm skillet that wasn’t really sticking together, I wasn’t thinking too optimistically on how this was going to turn out. Figured I’d keep going until an epic fail. 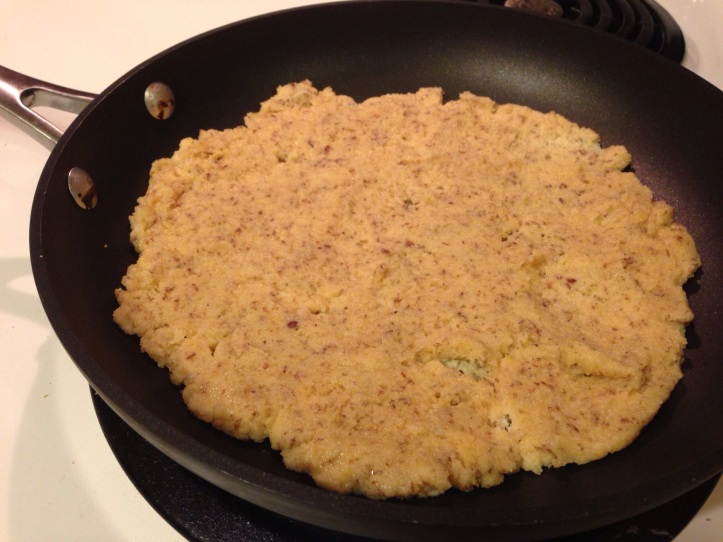 After managing to spread the dough about 1/2in thick, I cooked it for 3ish minutes and used the assistance of a dinner plate to flip it without breaking. Now… this is when the fire gets lit under your ass. You only have the 3-5 minutes it’s going to take to finish the second side of the crust to top the pizza and melt the cheese. 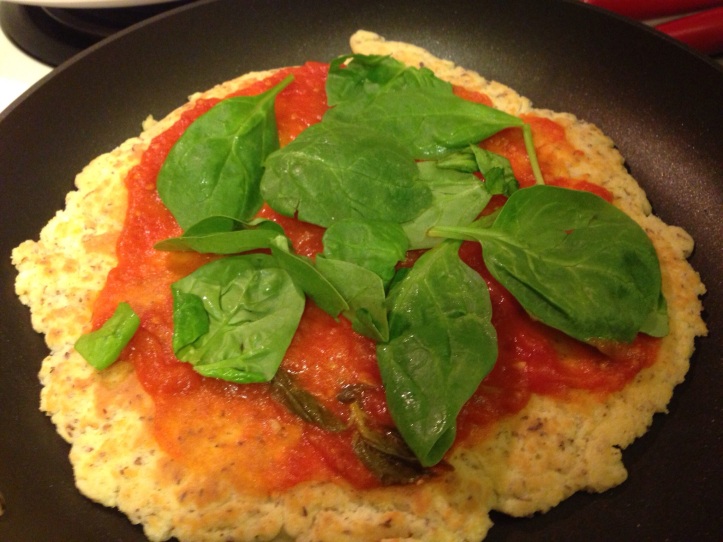 Once flipped, you now must make like Speedy Gonzalez and spread the sauce, place the veggies, sprinkle your herbs and cover in cheese. Do just that as quickly as possible and then throw cover your skillet to keep sufficient heat in to melt the cheese. Cook for a few more minutes… aka until all the cheese is melted or you smell the crust burning.

You know what else I accomplished? Boring you all to pieces. Geezus this post was long. Sorry about that. 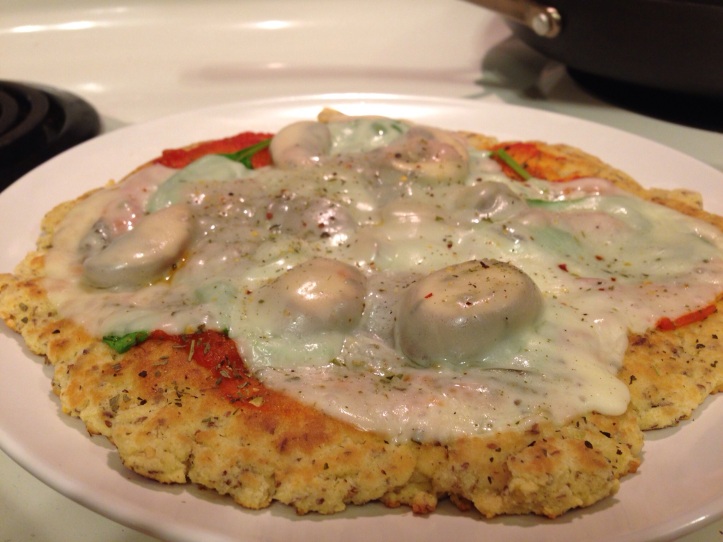