One would think the blogger would have taken a ton of photos of yesterday’s competition. Or AT LEAST ONE. Shoot, I can hardly eat a meal these days without at least the urge to document its aesthetic qualities for you all. In one sense, yes, it’s a fail. But here’s the truth.. I got caught up. In everything. These big ol’ CrossFit events will do that to you.

Yesterday was an absolute PR fest for the athletes of Southington CrossFit, and it was far more exciting to just stand there and cheer for my friends and scream for them at the top of my lungs than stay glued to my cell phone trying to frame it all for a nice snap on the iPhone. So, this is what I have to contribute. A picture of the shirt that none of you are really interested in looking at, because you each have one at home. Whoops!

Back to the competition. Final results for the entire field haven’t been posted yet, so I can’t really report back on how I did overall, yet I can say that I PR’ed my power clean at 135 (to think I was whining about not breaking 120 a month ago), and placed second overall in the 600m row by ONE measly second. ONE! Eesh. Such is life.

I can also happily report that the HSPUs I was dreading back in November went off without a hitch. Only reason I ever came off the wall was because I was so excited to do them that I threw myself off balance a couple times. Not once did I get no-repped for not being able to get there and lock out my elbows.

When the results go up, I’ll be happy if I finish in the top half of the field.

Hey look, my friend Jim to the rescue. At least he was on the ball enough to catch a few of us in action. Yay facebook. Here’s me making a less than cute face during the first WOD. 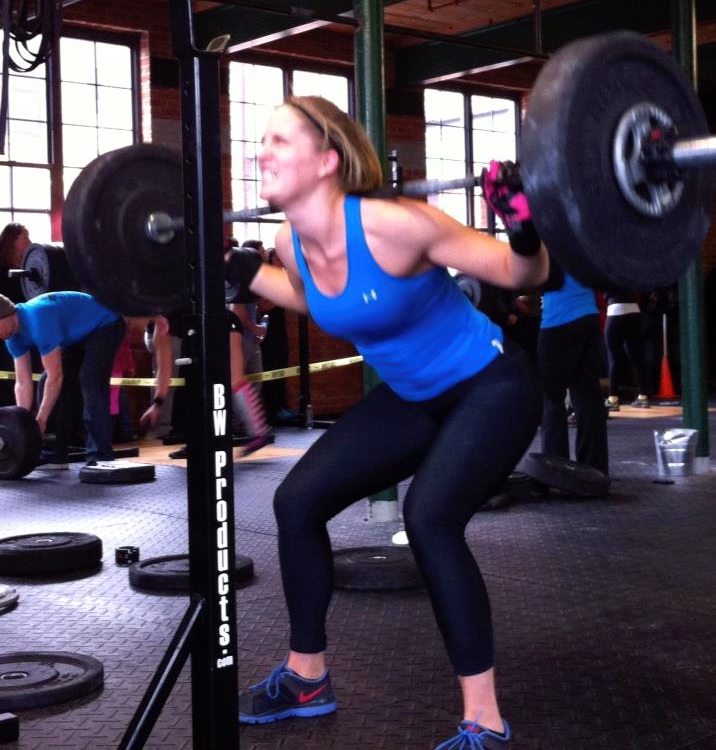 During the burpee-kettlebell swing workout at the end, I did catch myself thinking in my head “WHY WOULD ANYONE WANT TO DO THIS I HATE THIS”, but then I realized it’s only because I haven’t even tapped into my potential yet. I did the best I could for what I’m able to do right now, but I know I can do better. Training for better days starts……… not today, but tomorrow.

After yesterday, everyone deserves a pizza, 2 desserts and a few drinks while kickin’ it on the couch. Every single one of you who competed or volunteered yesterday put everything you had out there to make the day as awesome as it was.

Couldn’t think of a better day to remember as my first competition.